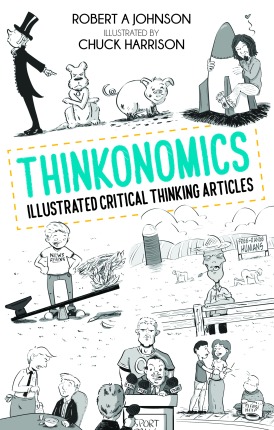 My latest book, Thinkonomics, was illustrated by the brilliant Chuck Harrison and released in March 2018.

It was written to encourage people to think more deeply about everyday subjects, especially those which they have already formed an opinion on.

It’s not a series of factual arguments, or a collection of things you should believe, but rather a series of challenges to you opinions.

My first book was released in 2013, and named Rational Morality: A Science of Right and Wrong. The introduction is available to read on this site, free of charge, here.

The book is more academically minded than my usual work, though is attempted to appeal more to the pop-philosophy audience. It attempts to achieve three main goals with its arguments:

You can buy the book in all the usual places, here are a few links: